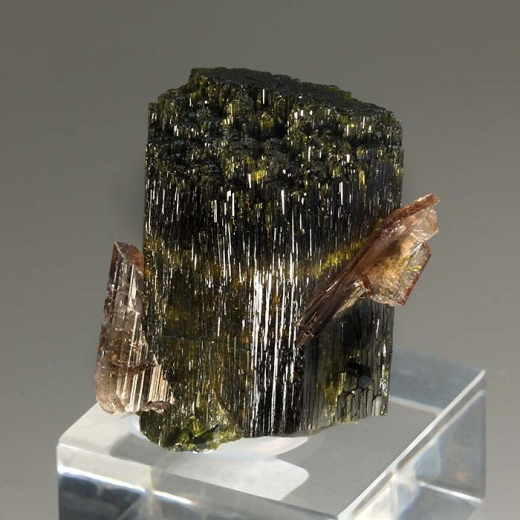 A novelty at Tucson 2016. These specimens come from a recent find (late 2015) in a mountainous area near Canta, a town in the Peruvian province of the same name, in the central part of the department of Lima. Specimens were found in a scarce meters deep fissure with a planar and elongated shape. Subsequent attempts to explore if the cavity had continuity gave no success.The samples are formed by a numerous groups of axinite crystals, with an excellent brilliance and transparence, showing color zoning and they are accompanied by epidote. They are disposed on a solid matrix formed by aggregates of small garnet crystals. FESEM-EDS analysis of some axinite crystals has shown that it is manganaxinite or axinite-(Mn). The results show a ratio Mn:Fe on 6:1 (with some magnesium) for samples with a slight brown color to almost colorless; deep brown color crystals show a ratio Mn:Fe on 2:1 (pers. comm. J. Rosell).Referring epidote, we observe various stages of crystallization. On the one hand, in some specimens, we observe well developed prismatic crystals with parallel growths, brilliant and with a deep and intense green color, with some zoning. In the other hand, they are accompanied by elongated epidote crystals, with good transparence, those are covering and are part of the garnet-epidote matrix.This orange to brown garnet small crystals has been also analyzed and the results indicate that it is andradite, with traces of manganese.These new axinite-(Mn) specimens may be included within the best axinite specimens worldwide. The main crystal is: 1,8 x 0,6 x 0,1 cm.

30 other products in the same category:

To be determined Shipping
0 € Total

has been added to compare.
has been removed from compare.
Continue shopping Compare